skip to main | skip to sidebar

So as I have found out from my time over here each city I’ve visited has a different feel/vibe to it.  For example, Barcelona is very cosmopolitan, Rome is historic, Paris is elegant, ect.  The same thing can be said about different neighborhoods in a city, and Barcelona is no exception.

To situate yourself, here’s a map of the different neighborhoods (barrios) of Barcelona.  The main ones I’m going to talk about are Sants-Montjuïc (where I live), El Raval, Barri Gòtic, El Born y la Ribera, Barceloneta, Gràcia and L’eixample (my favorite neighborhood): 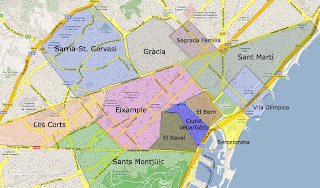 Sants-Montjuïc: This neighborhood actually has 3 sub-neighborhoods within it: Sants, Montjuïc and Poble Sec.  I live in Sants with my host family and it’s mainly a residential neighborhood.  I joke with my roommate that the only thing we have here is a bunch of old people because that’s all I really see walking around.  The most famous part of this neighborhood is Sants-Estació, the most used train station in Barcelona.  Now, Montjuïc is the main hill of Barcelona and it’s home to the Olympic stadium, a castle (which was used to suppress the Catalan people in 18-19th centuries), Museu Nacional d'Art de Catalunya and of course the Magic Fountain of Montjuïc (in the summer there’s a fountain and lights show).  Poble Sec (Catalan for “dry village”) is the neighborhood above Montjuïc on the map.  Again, it’s a fairly residential area but there are some great bars and clubs there if you want to get away from tourists.
El Raval: This is an interesting neighborhood.  It’s to the left (going away from the sea) of La Rambla (the famous pedestrian street that’s filled with street performers, cafés and venders).  It’s famous for its nightclubs, prostitution and the immigrant population (it’s also known as Chinatown).  I’ve only wandered through the neighborhood a couple of times because it’s fairly dirty and I was always worried about getting pickpocketted.  In my opinion, the best part of the neighborhood is La Boquería, the most amazing open market ever which is right off La Rambla.  There, you can find the freshest fruit, meat, seafood and [insert another type of food here] in all of Barcelona.  I love just walking through it taking in all the sights and smells.
Barri Gòtic (Gothic Quarter): This is the old part of Barcelona, you know back when the Romans called the city “Barcino.”  It’s to the right of La Rambla and it ends with Via Laietana (the street where I saw the Correfoc back during La Mercè).  For many, many years (probably from Roman times to the 8th century) this was all there was of Barcelona.  So, the best way I describe the neighborhood is that it’s a maze of narrow streets and alleyways.  You can easily get lost your first time there but as long as you know where Plaça Sant Jaume (the plaza that’s the seat of power of the local government) and the two streets that lead up to it you can find your way around.  The highlights of the neighborhood are the Gothic cathedral, Plaça Sant Jaume and Plaça George Orwell (next to the plaza’s plaque that says “Surveillance Zone en a 500m radius; oh I love it how they appreciate the irony in that).
El Born/La Ribera: To the right of the Gothic Quarter, extending all the way to the Parc de la Ciudadella.  This neighborhood used to be the rich merchants neighborhood back when Catalunya was the commercial powerhouse of the Mediterranean.  This is also where all the locals go at night to drink as it’s away from the touristy areas.  The highlight is Santa María del Mar, a beautiful Gothic church.
Barceloneta: This neighborhood has somewhat of a sad past.  It was originally built to house all the displaced people from El Born during the 1700s.  They were displaced because after Catalunya found itself on the losing side of the Spanish War of Succession the centralized Spanish government decided to build a massive fortress (La Ciudadela) to control the local population right over part of El Born.  Now a days, the neighborhood is known for its excellent seafood restaurants as it turned out to be a little fishing village due its proximity to the sea.  And of course, you can find the beach there along with a modern shopping mall.
Vila Olímpica: This was developed when Barcelona hosted the 1992 summer Olympics, which greatly boosted the city’s profile (so much that it’s now the most visited city in Spain).  It has a nice shopping center, two of the most famous towers in Barcelona and it’s home to my university, Universitat Pompeu Fabra.
Gràcia: This used to be its own village before it was annex by Barcelona during the 1800s.  It’s know for its many plazas and the small town feel, like you don’t feel like you’re in a city when you’re here.
L’eixample: My favorite neighborhood in all of Barcelona because it is absolutely beautiful.  It was designed by Cerdà when the city realized that it needed to expand back in the 1800s.  At first it was meant to be a social utopia with lots of trees and open spaces for everyone to enjoy.  Of course that’s not how it turned out but nonetheless it’s still very beautiful.  This is where the Modernist architecture “competition” took place and as a result the two main avenues (Passeig de Gràcia and La Rambla Catalunya) have some of the best examples of Catalan modernist architecture. Here’s the typical design for the neighborhood, note the open space in the middle that allows for air circulation and lots of light: 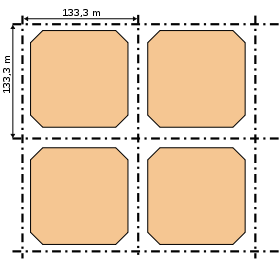 L’eixample has many subsections, including Sagrada Família and Sant Antoni.  The main things to see are La Pedrera (designed by Gaudí), Illa de la Discordia (3 beautiful and famous modernist buildings right next to each other) and Gaudí’s unfinished church of Sagrada Família.  If I were to have an apartment in Barcelona, this is where it would be.


As this is my last weekend in Barcelona, I will be taking pictures of all these neighborhoods.  They can be found here in my “Out and About in Catalunya” facebook album and it will be completely by Tuesday.
Posted by Sean in Spain at 1:56 PM

Sean in Spain
Just an American trying to be català...